SUSTAINABLE MOBILITY: MADE IN LEIPZIG (PART 2)

You are here:
articlesnews

The second part of the story about the International Summer School “Sustainable Mobility — Made in Leipzig”. The previous post was mainly about trams, and now, more about the role of a private car and possible changes in the principles of its use in the future. We relate about the vision of both university professors and representatives of major automobile manufacturers.

Lecture by Gerd-Axel Ahrens, professor at Dresden University. A slide behind him suggests that in the future, it is important to ensure that economic growth does not lead to a proportional increase in the volume of transportation, and this is one of the most difficult challenges. 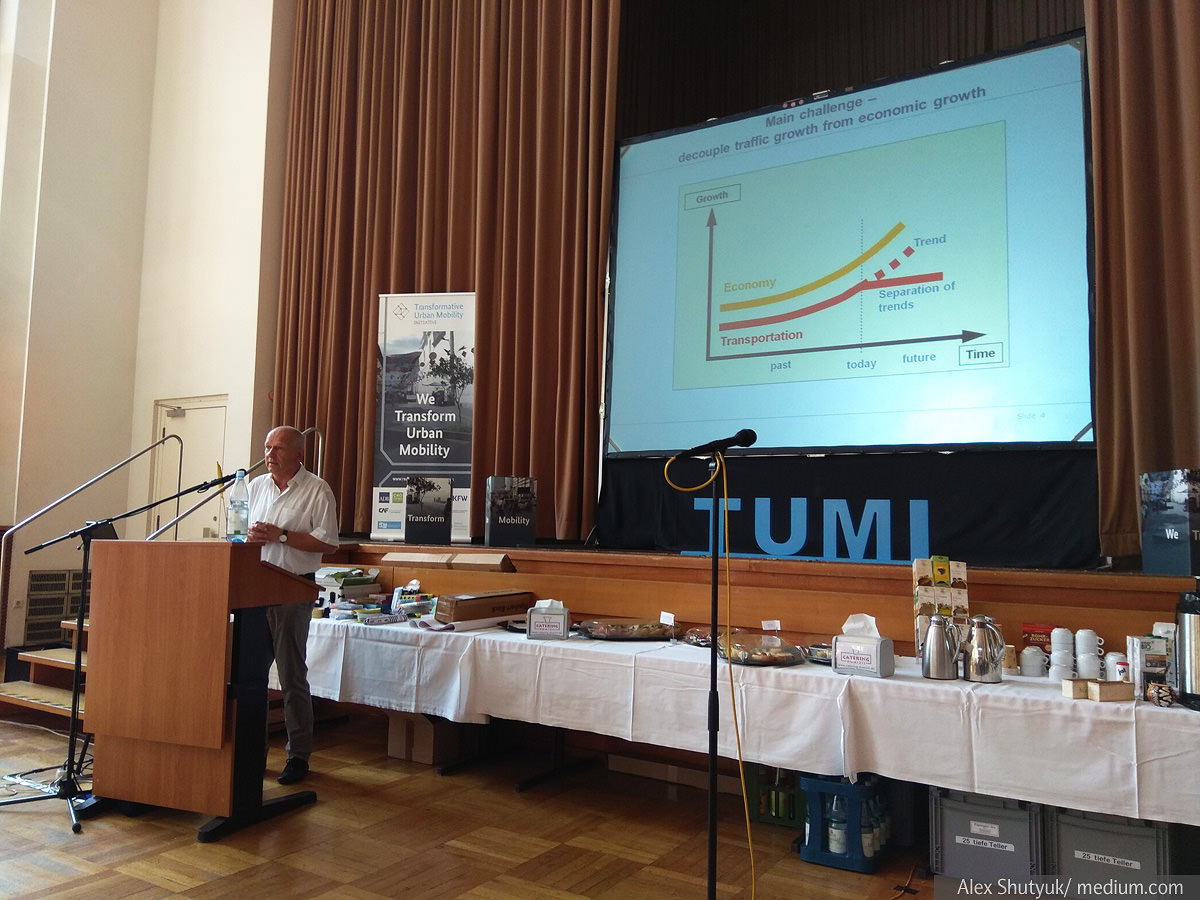 In German cities, 20% of the streets are major arterial streets with a speed limit of 50 km/h, while the rest are residential and business streets with a limit of 30 or 20 km/h. The number of private cars in Leipzig itself has increased 2.5 times since unification of Germany. If in the 1990s there were 200 cars per 1,000 inhabitants, and now there are 470.

The number of transport services is influenced not only by the economy, but also it is directly influenced by the population, which is dramatically increasing in many countries.

Imagine that the inhabitants of China and India start driving as much as Americans or Germans do. How will this influence the increase in energy consumption and ecological burden? 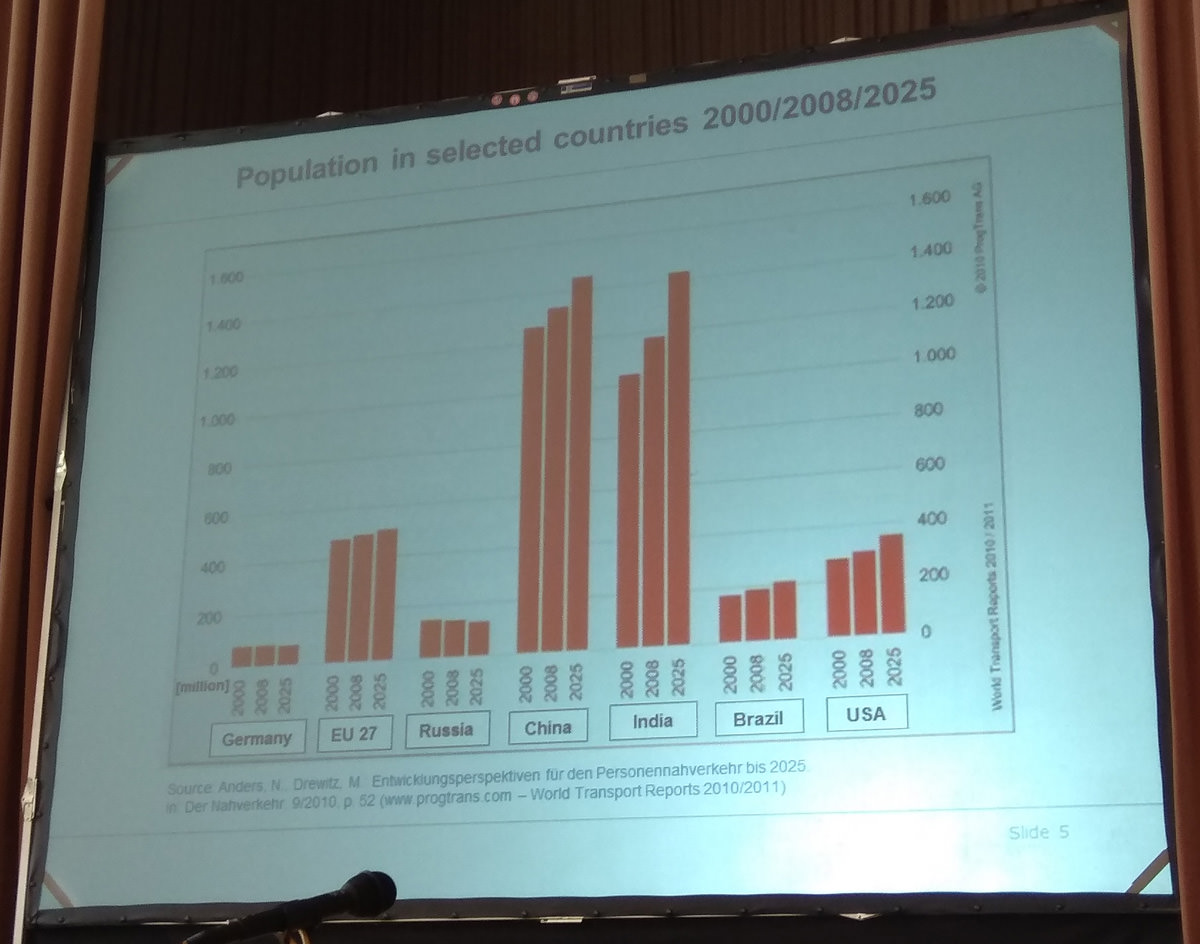 Population aging is a global trend. Of course, the world’s major countries are leading here, but Africa is catching up. Nowadays, in Germany, the young people also tend to use private cars considerably less in daily travel than the older generation. Instead, the German politicians in their work still focus on the views of particularly elder generation, who are multitudinous and actively cast their votes in elections. As a result, the decisions on infrastructure development are made, focusing on people, most of whom will not use it when it actually appears.

By the way, the reality may change much faster than it is expected. For example, once scientists predicted an increase in the level of the world’s ocean by 2 cm by 2030, although, as of now, it has already risen by 8 cm. 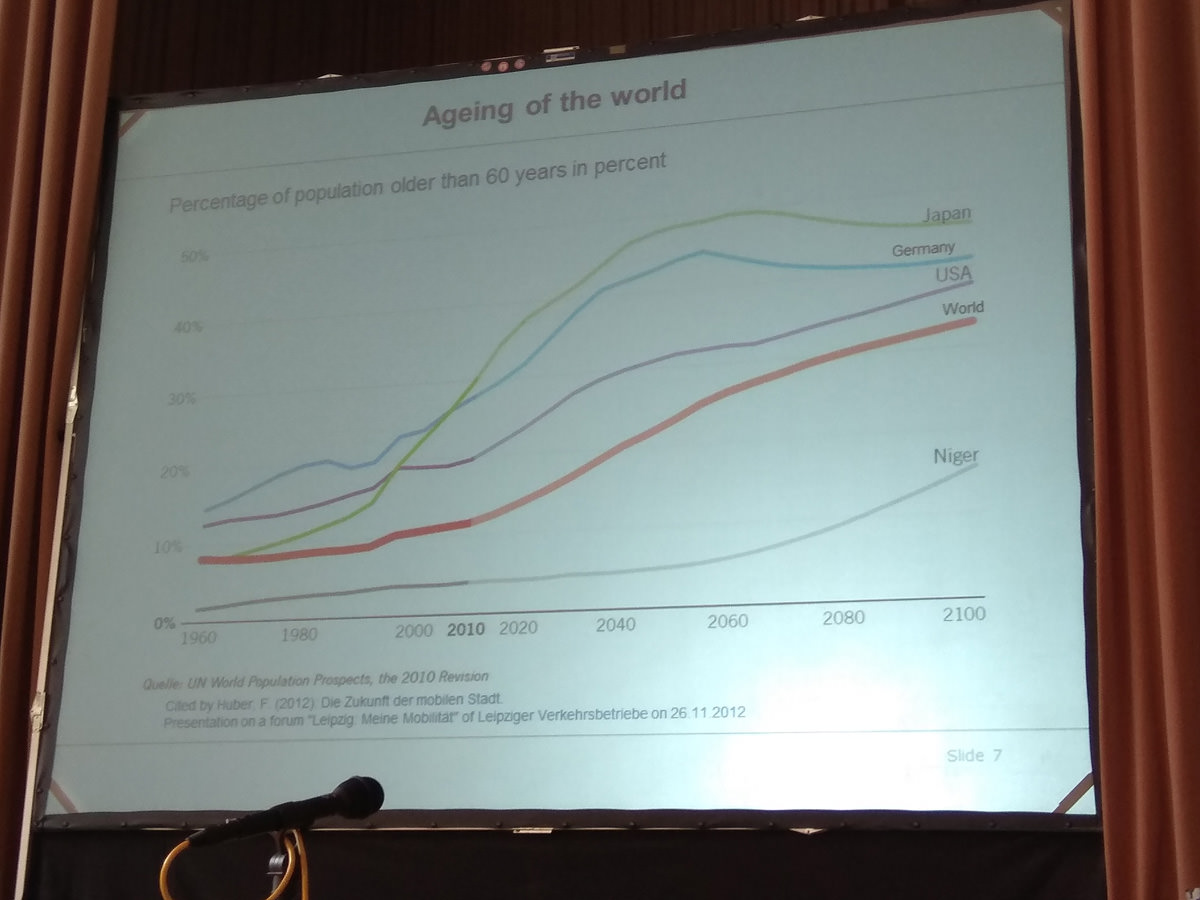 It is important to understand that a car not only generates emissions, but also produces dust and occupy the space, so it is important not only to replace the type of fuel but also to reduce the number of cars in urban mobility.

In Germany, the number of people in households has changed dramatically over the past 100 years. In the early 20th century, families consisting of 4-5 people dominated, but now, most people live alone or in pairs. Accordingly, when they get to work by car, they also do it separately.

Changing the mode of transport you use to get around the city, you can save 300-400 euros a month (in Germany)

What is needed to change the transport behaviour of citizens? 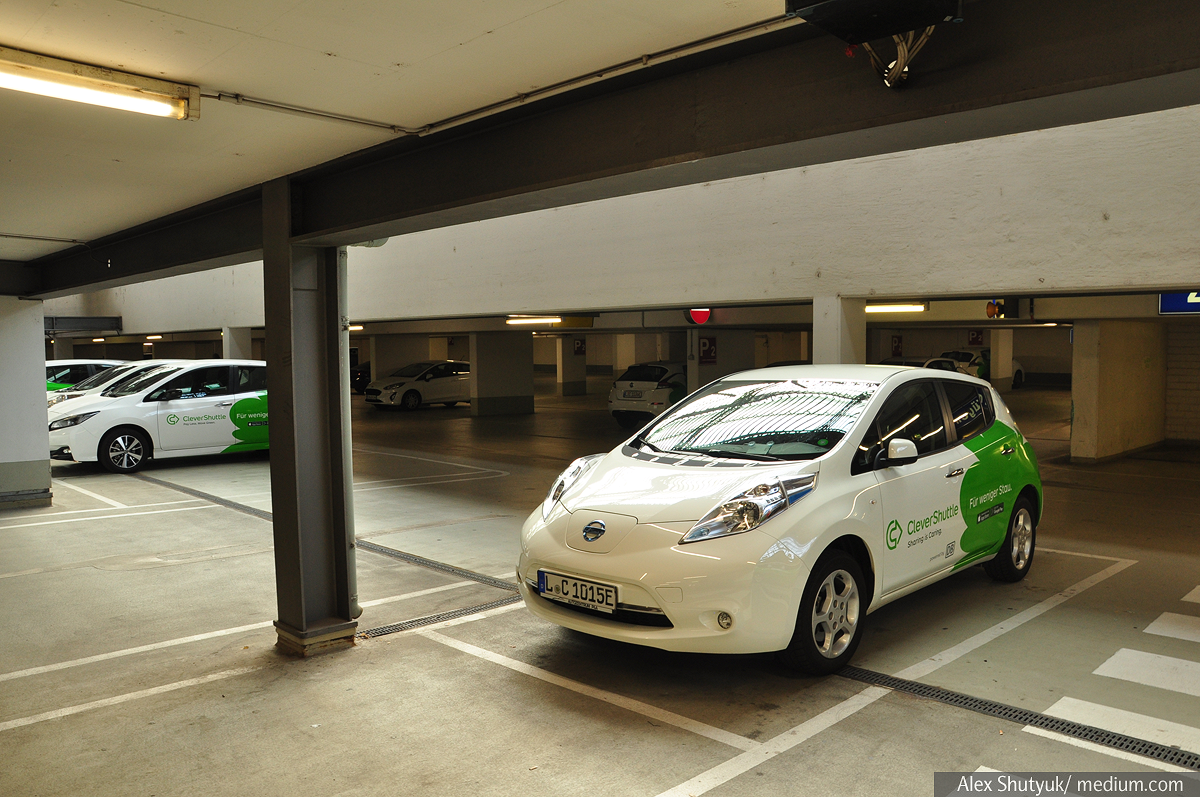 The manufacturing of cars as a product may eventually be replaced with the provision of services – automakers will not sell specific cars, but the opportunity to use a rental car and public transport for a certain subscription fee.

With regard to parking, if to calculate its cost based on the cost of land in the city, it will turn out to be much higher than it is now. That is, parking is currently subsidized (formally) from the city budget. 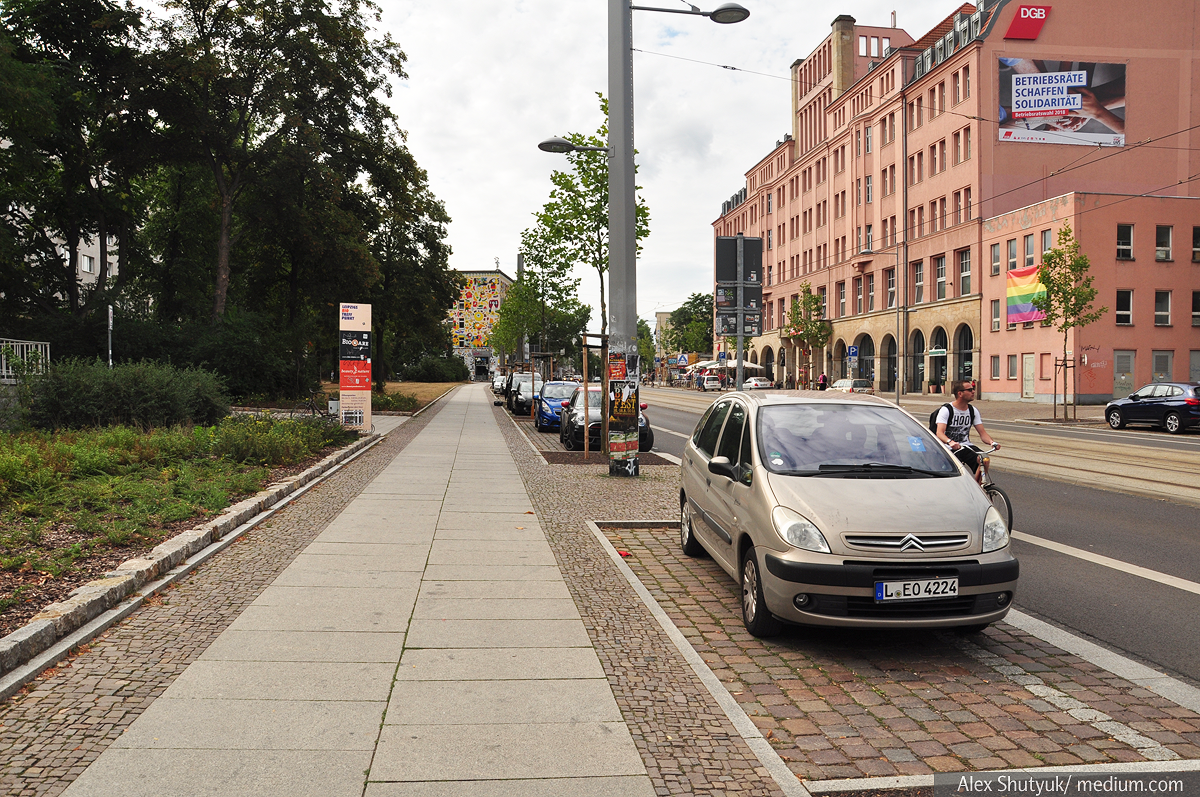 On access to public transport. It is unlikely that you will read something oversophisticated here, but it is still important to repeat it once more. So, why should public transport be inclusive (barrier-free)?

Accessibility of public transport for all the citizens

Accessibility for citizens with disabilities. It is important to use tactile elements in paving and signing the ticket machines with Braille script. Markings of pedestrian crossings, call buttons near traffic lights (to enable ticking), audio ads and high-quality lighting for pedestrian crossings, stops and for PT passenger compartments are equally important.

What is important for people traveling in a wheelchair?

About the ways of impact on driver behaviour. Behaviour can be changed by four methods: educational, legislative, economic and engineering. When it comes to the economy, there is little that influences the law-abidingness of drivers more, as the size of a possible fine for violation of the laws, along with its inevitability. In this regard, it is interesting to compare the size of fines in various European countries. 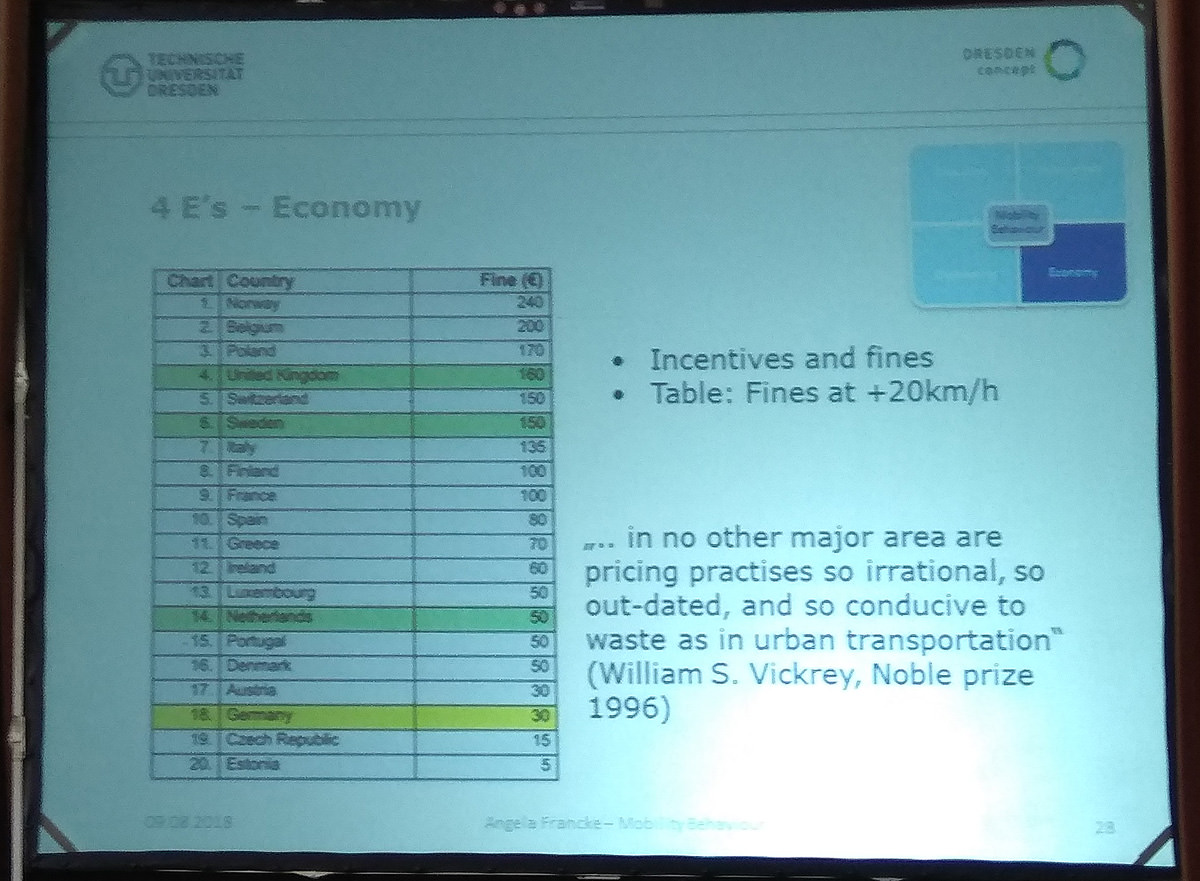 It was interesting to hear the way of looking at the development of mobility in the cities of the BMW Concern, one of whose automobile plants is located in Leipzig.

In short, the German auto giant experiences changes and looks for new approaches in order not to lose positions. One of the areas of development is the introduction of automated vehicles. Interesting figures from the automaker: on average, every modern car is not used 96% of the time – that is, it simply stands. 100 hours a year the average car owner spends in search of a parking space, 35 hours a year he/she sits in traffic jams and 6 hours a year spends at petrol and diesel service stations. 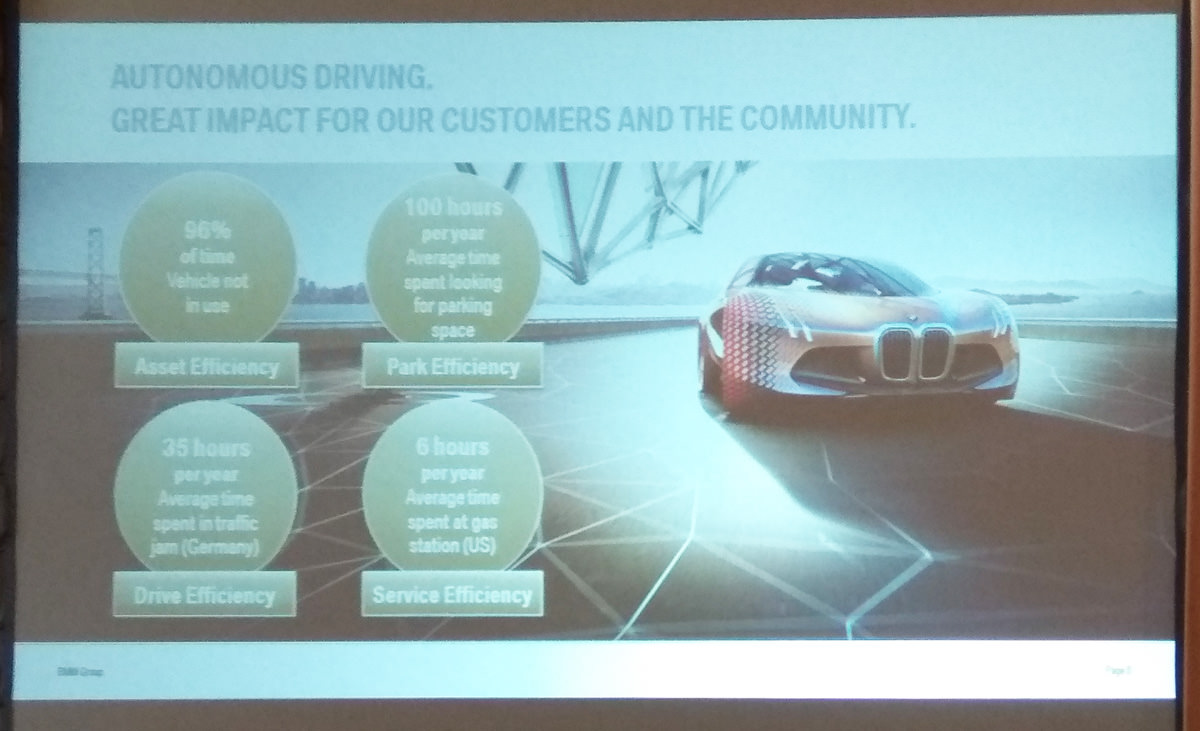 On the way to full automation, the car must go through the evolution of various degrees of assistance to the driver (more precisely, it is already going through it) and in this process, it is necessary to solve the issue of certification, responsibility and ethical aspects of possible solutions. It is expected that computers will drive cars, as they do not get tired, are not distracted by switching radio stations and have faster perception-reaction times, which can reduce the number of accidents and make the traffic safer. An ethical issue is whose life to save in the event of an accident, that is, the car must learn to choose a solution that minimizes damage to living creatures. 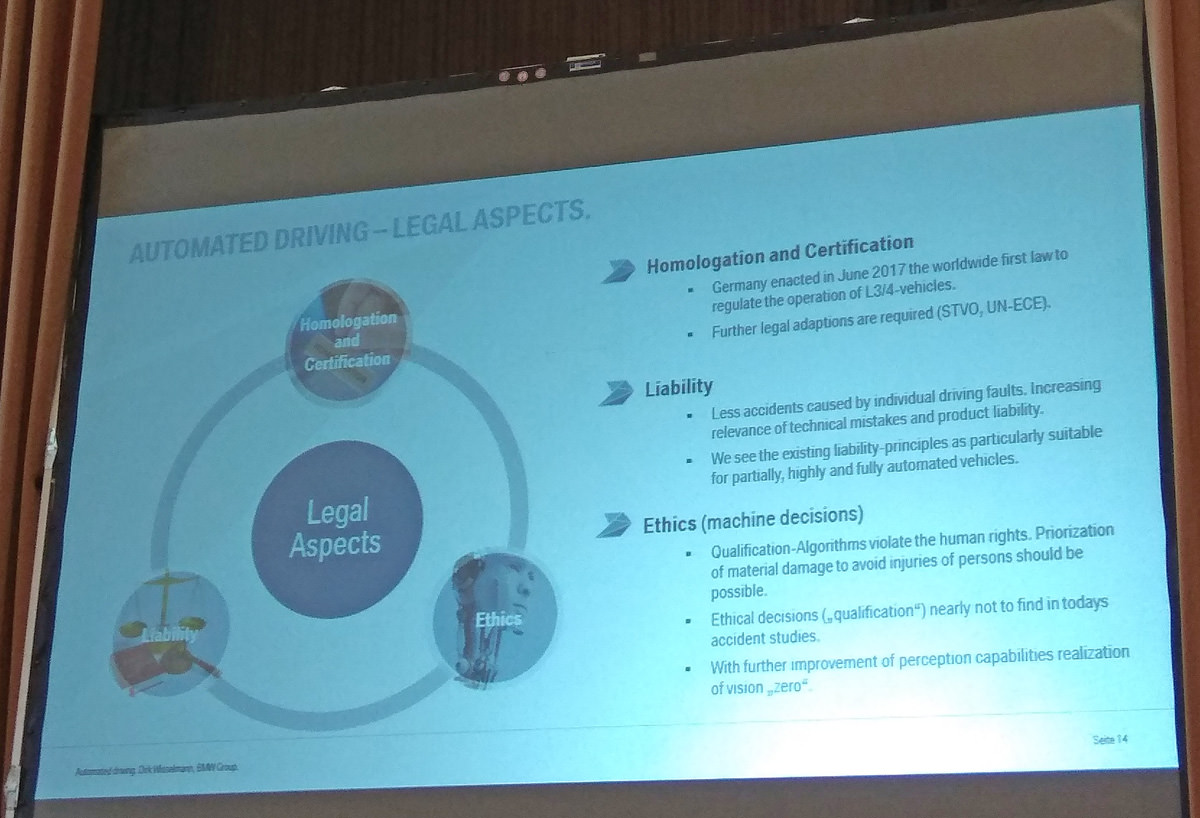 Another direction is the development of electric vehicles. The BMW Concern is one of the world leaders in the production of electric cars and hybrids, and in some markets, their electric vehicles occupy a larger share of their market segment than all cars in general. In Norway, the BMW i3 model has become an absolute top seller, which is very unusual for the producer. 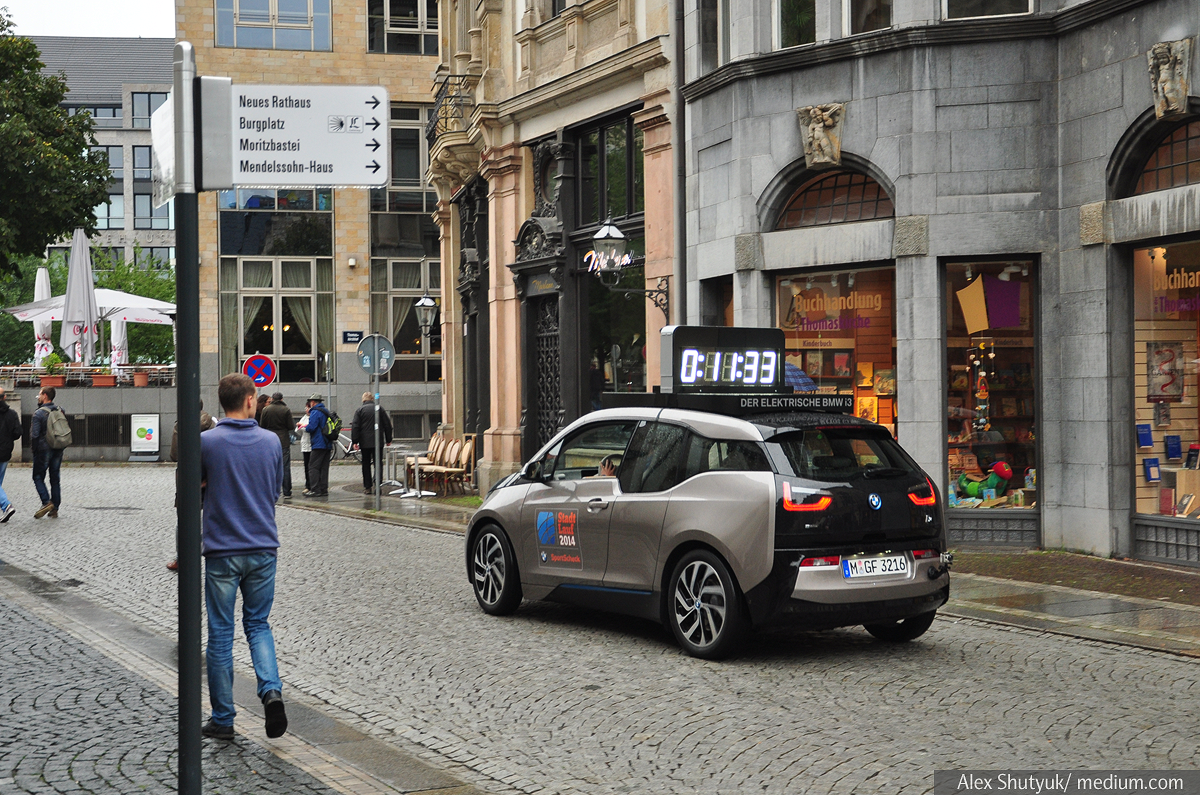 BMW anticipate changes and get prepared for them. It is becoming more and more worthwhile to own a car in cities, and the Bavarians are thinking about not selling cars as physical objects, but providing mobility services instead. That is, you do not buy a specific car, which you then need to park and repair somewhere, but a subscription for using rental BMW cars in combination with public transport and bicycle rental. Together with self-driving, such an approach, for example, can significantly reduce the need for parking slots, since cars will work more and occupy parking space for shorter periods of time while waiting for their sole owner. For the user the advantage is that you do not have to agonize over a choice of a car for all of life’s emergencies, but to take a cabriolet or a spacious wagon depending on the circumstances.

If you have found a spelling error, please, notify us by selecting that text and pressing Ctrl+Enter.

The following text will be sent to our editors: